Did the translocation of elephants into Kenya’s Maasai Mara National Reserve backfire?

Translocation of elephants from Narok North into Maasai Mara was on the Kenya Wildlife Service’s (KWS) agenda during September. According to the KWS, as of a few days ago phase one is complete and a huge success.

But how does one define success when two of those elephants are now dead? 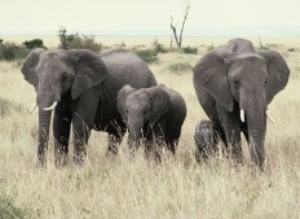 Near Mara Serena Lodge circa 1983

Increased human/wildlife conflict, which is an ongoing issue in Kenya, prompted the move.  Information obtained from the KWS stated that 200 elephants had been cut off from the greater Mara ecosystem and were creating havoc in Narok North.

Over a ten year period a total of 9,299 human/wildlife conflict cases occurred in the area with 5,052 of those, or 54 percent, inflicted by elephants. So after continued monitoring by KWS researchers, the first 62 elephants were told to pack their bags.

The KWS loves to relocate wildlife – hippos from a Nairobi sewer treatment plant, hundreds of zebra and rhino into Meru National Park, a virtual revolving door of wildlife from one area to the next. Most of the time movements go as planned.

This time, over a two week period, a team of veterinarians, KWS officials and scientists tranquilized, then plucked the pachyderms by cranes placing them into moving vans.

Scientists are now monitoring the new transplants for any residual effects. Once they have decided the elephants are settling into their new home and the rains gone, phase two will begin.

But apparently, two elephants escaped the monitoring process, paid an unwelcome visit to their new neighbors in Kisii, west of Mara, and were promptly killed.

Is there no safe place for these creatures?

These days questions and controversy how to solve the poaching and human/wildlife conflicts are growing just as fast as the crises themselves. Solutions are few.

Backed by solid research, the KWS intentions are good, but are they just slapping a band aid on a multi-faceted problem that will never go away until stricter enforcement is in place on both sides?

I present these questions as this is a crisis. I would like to hear from you, what you think and feel about the state of wildlife in Kenya.

I have had to disable my comments box – too much spam – but you can find my contact information on the contact page as well as commenting on facebook.

This article was also posted on examiner.com