This week something good happened for Kenya’s elephants

Kenya and six other African nations took an official stand against ivory poaching.

The Kenya Wildlife Service designated Monday as the first ever “African Elephant Law Enforcement Day” followed by an assortment of celebratory events that ended Wednesday with the torching of five tons of ivory in Tsavo West National Park.

As President Kibaki lit the cache of ivory, which included thousands upon thousands of hankos, he basically said that wildlife crimes of any kind will not be tolerated.

There is a correlation between the Chinese working on Kenya’s infrastructure and increased elephant poaching. Not that all Chinese are involved, but will Kenya care if their working relationship with China is in jeopardy as a result of their renewed warfare against wildlife crimes?

Or will politics get in the way?

Some experts have suggested stop the demand and ivory prices will plummet, then poachers are out of a job. Sounds great, but how does one stop the demand from Asian countries where the use of ivory has been imbedded in their culture for centuries and they’re not about to give up tradition?

For additional information regarding the ivory burn and Kibaki’s statement please check out my articles on examiner.com.

Links referenced in this article: 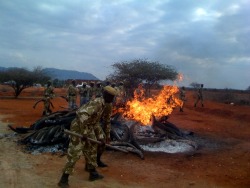